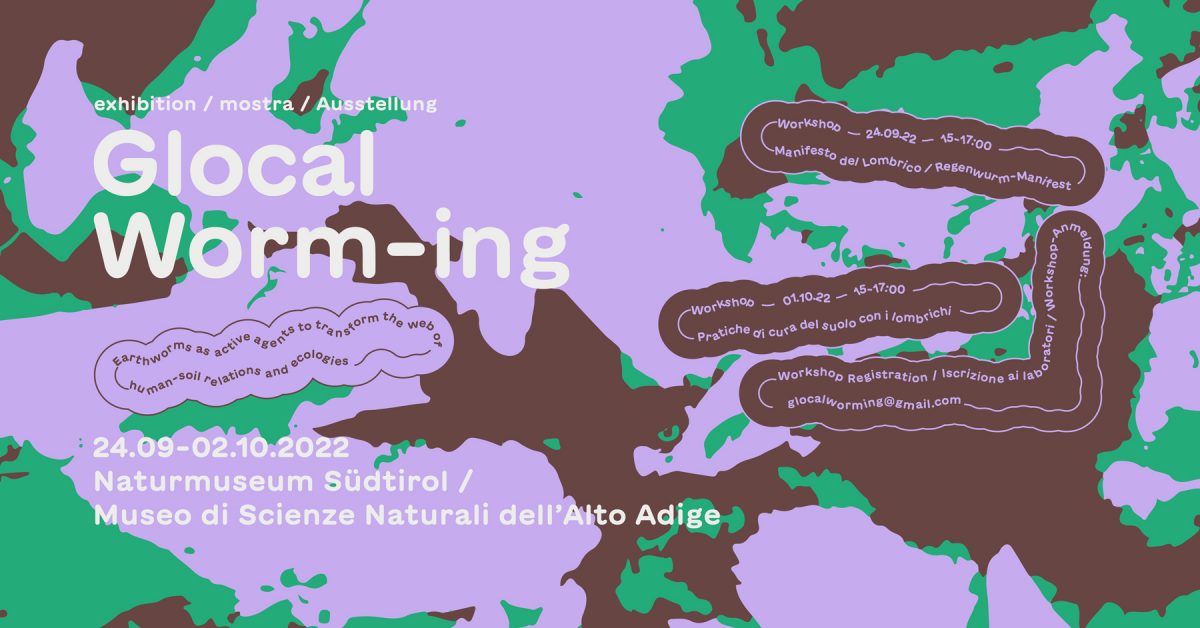 Eco-Social Design graduate Merve Bektas is exhibiting her thesis project “Glocal Worm-ing” at the Naturmuseum Südtirol, in partnership with the Faculty of Design/Art, as part of Bolzano Art Weeks 2022

From the 24th of September to the 2nd of October 2022, the Glocal Worm-ing exhibition takes place at the Museum of Nature South Tyrol, in partnership with the Free University of Bolzano, Faculty of Design/Art, as part of the Bolzano Art Weeks 2022. Merve Bektas, an Istanbul-born eco-social designer, artist, and curator of the exhibition, prepared the essential setting for the visitors to encounter with earthworms as kins to humans – a relationality that we have forgotten for so long.

The exhibition presents the Earthworm Manifesto as the heart of the project, bringing the soilscapes through the perspective of earthworms into audiovisual media. The manifesto can be listened through scanning a QR code with headphones. In the background, the registered sound of earthworms’ movements is also present. Earthworms and moving words from the manifesto are projected on the soil. Visitors are invited to contribute to the continuation and co-creation of the Earthworm Manifesto.

A core principle of the project, “Half for me, half for you” – a chant of Hatidze Muratova, who is one of the last wild beekeepers in Europe – anchors itself as a repetitive mantra highlighting the importance of reciprocity. This holds an invitation for the visitors to reflect on “how to give back” and to take action which is materialized as a template on how to make compost in collaboration with earthworms. The visitors are invited to become part of the network and experiment with their soil care practices in the public soil space of Glocal Worm-ing in Semirurali Park, Don Bosco, Bolzano.

“Half for me, half for you”

In response to the global call for the care of soils, Glocal Worm-ing investigates through design ways to nurture mutual human-soil relations together with earthworms and active citizen-participation in order to enhance multispecies co-existences in cities.

A Global Care Call for Soils

Fertile soil is currently being depleted faster than it can be renewed, a crisis referred to as Peak Soil, resulting from not only continuous economic growth, but the forms of patriarchal, colonialist, and human-centered cultures of the Global North, and the separation of natureculture, which is apparent in the emerging environmental, social, and climate crises. Soils are now on the list of environmental issues that need global care and caring for them entails caring for those who depend on them. Earthworms are one of the symbionts of soil life and are necessary for living soils. Darwin (1881) studied earthworms for more than 40 years and stated that earthworms have played more functions throughout the history of the world than any other animal species.

“Moderns imagine the world as an inanimate surface to be occupied; for many relational cultures, on the contrary, humans and other beings inhabit a world that is alive.”
Escobar, 2018

The Earthworm Manifesto, which is a key design harvest of the project, acts as a transformative storyline weaving relations of citizens with the world of the earthworms and the underground. How would you become part of their manifesto? What relations and stories are you building? Why are the facts and fables necessary to consider together?

“I form the soil, and the soil forms me.
I swallow the soil.
Soil is part of me.
I am the soil.”

Earthworm Manifesto, 2022
written by Merve Bektas in collaboration with earthworms

In this workshop, the participants approach providing soil care practices with earthworms: starting from getting to know earthworms as kins to humans, identifying three earthworm species, and learning the basics of compost – focused on bokashi.

As part of the joint event

Adele Buffa – for the wonderful sewing works of the exhibition, Georg Zeller and Stefano Bernardi – for the earthworms’ movement sound within the soil, Margit Schweigkofler, Gabriela Miteva and Svea Möbs – for representing the earthworms’ voice, Katharina Erlacher and Celeste Meisel – for initiating a solidary chain for the project.

There is no gallery selected or the gallery was deleted.