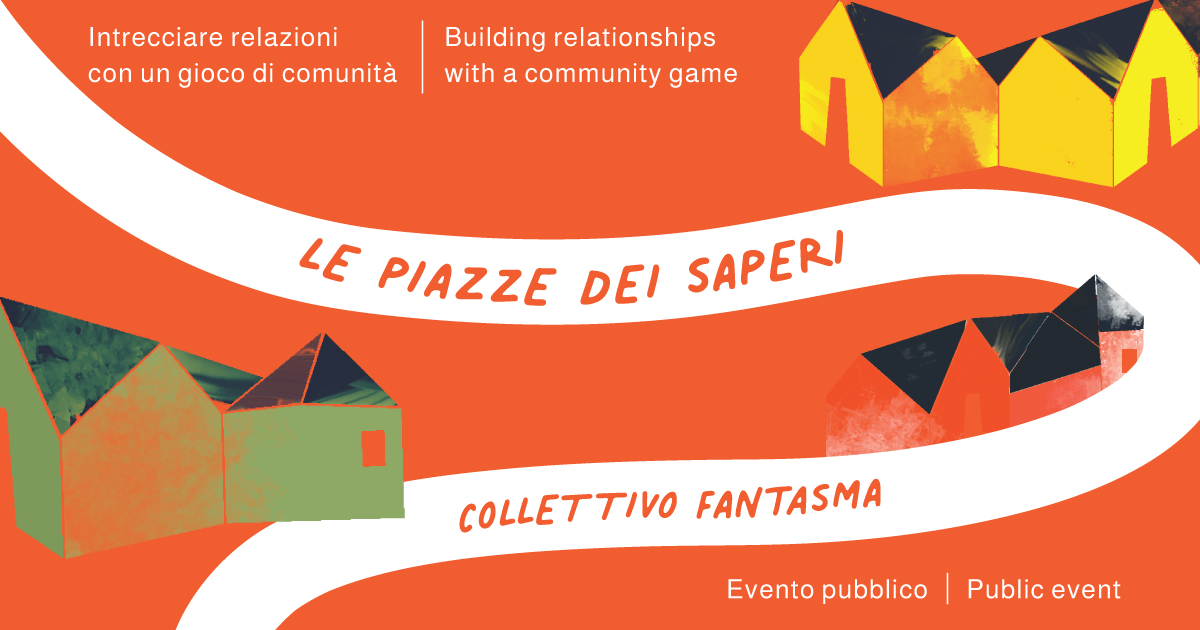 After spending two years working on eco-social projects as part of the Master’s course, Giulia Fasoli, Maria Pasqualini, Rendy Anoh, and Vanessa Deotto decided to give it a try and form a design collective entitled Collettivo Fantasma. Graduated in 2021 in the Eco-Social Design Master at the Free University of Bolzano, and driven by similar curiosities and ambitions, they wanted to understand how to concretize design projects outside of the University context.

So, what is Collettivo Fantasma about?

The creation of the collective is an answer to personal and common reflections and wanderings, as the four designers wanted to put into practice their capacities towards contexts that were dealing with real-life challenges. Along with this thought, they also fiercely believed in embracing the sense of community and sharing amongst them because they wanted to challenge the high level of competition within the design culture. They wanted, after all, to put into practice the values learned in the master, by trying it themselves in the first person.

What is Le Piazze dei Saperi?

Le Piazze dei Saperi is the group’s first collective project, drawing from the thesis project developed by Giulia Fasoli in 2021 whose aim was to encourage alternative ways to stimulate dialogue between intergenerational groups through a non-competitive game.

Le Piazze dei Saperi aims to allow people of all ages to share know-how amongst them, initiating conversations, relationships, and new synergies thanks to every person’s knowledge carried in their own ‘personal luggage’.

Starting from this point, the group shaped it for the peripheric neighborhoods of Don Bosco, and Europa-Novacella in Bolzano. Since peripheries are often seen and considered places of absence, Collettivo Fantasma on the contrary, strongly believes that these contexts have very rich expressions of heritage and cultural values that should be worthy of attention.

Le Piazze dei Saperi is one of Bando Generazioni 2022 winners. Generazioni is a fundraising project which aims to support, every year, social and cultural projects. It is developed by two social realities in Alto Adige, Inside and Young Inside in collaboration with Cooperative Mercurio.

In the process of making a community game, Collettivo Fantasma playfully interacted with residents in its first collective activity…

To kick off the project, the group designed a narrative workshop in the shape of neighborhood walks with residents and passers by. The aim was to identify unique stories and curiosities about the squares and sites nearby, in order to get to know the people and the places that constantly create and reinvent the neighborhood identities.

Thanks to these stories, the group was able to physically identify in a map what knowledge was related to each place. Such narratives are helping the group to develop a final map that is going to be used as a guide for participants during the final game event.

How does the game work?

The game takes place in the main squares of neighborhoods of Don Bosco and Europa-Novacella, where two different game paths will happen simultaneously, one in each neighborhood.

By using the squares as game sites, the game aims to re-activate these public spaces and the many social encounterings and know-how that only a shared common space can, through an eccentric and playful way. Playing is an occasion to initiate exciting conversations, friendships, and stories.

Three squares in each neighborhood will correspond to the three steps of the game. Starting by choosing a theme card where conversations will be initiated in the first step. It continues to the following two squares where the knowledge previously shared will be explored further, and finally documented in the Community Archive. The archive documentation will take place in Don Rauzi’ square. The square that connects both neighborhoods, where everyone will be involved in the construction of the archive by playing!

The value of the Archive lies in the sharing of knowledge, and, most importantly,
in making it accessible to everyone.

If the biggest wonder of all social projects is ‘What will remain after?’ Collettivo Fantasma thought that a physical archive should solve this burden question. For them it is fundamental to keep the project alive in the neighborhoods after the activities are finished. The archive is made of a patchwork fabric composed of cotton squares that will be sewn together. In each square, a participant will write the knowledge that most excites them, with its corresponding description. It will be then exposed in a designated area of the public space and will be accessible to citizens, associations, and institutions in the area, becoming a tool that can frame its community and inspire future activities related to the knowledge and interests expressed during the game.

How, when, where is the game event happening?

The event of ‘Le Piazze dei Saperi’ will be held 1st and 2nd of October from 10.00 to 17.00.
During the game event, participants can choose to take one of the two paths proposed (each one a 15-minute walk)

In addition, on the second day of the event, from 17.00 to 18.00 the archive will be further enhanced by a performative action, realized by the young actors of Cristallo – Verein Association. The performance’s intention is to represent and manifest artistically the community know-how, inviting participants and passers-by to participate. This will not only highlight the results collected during the game days, but will allow the archive to become a community artifact available to everyone.