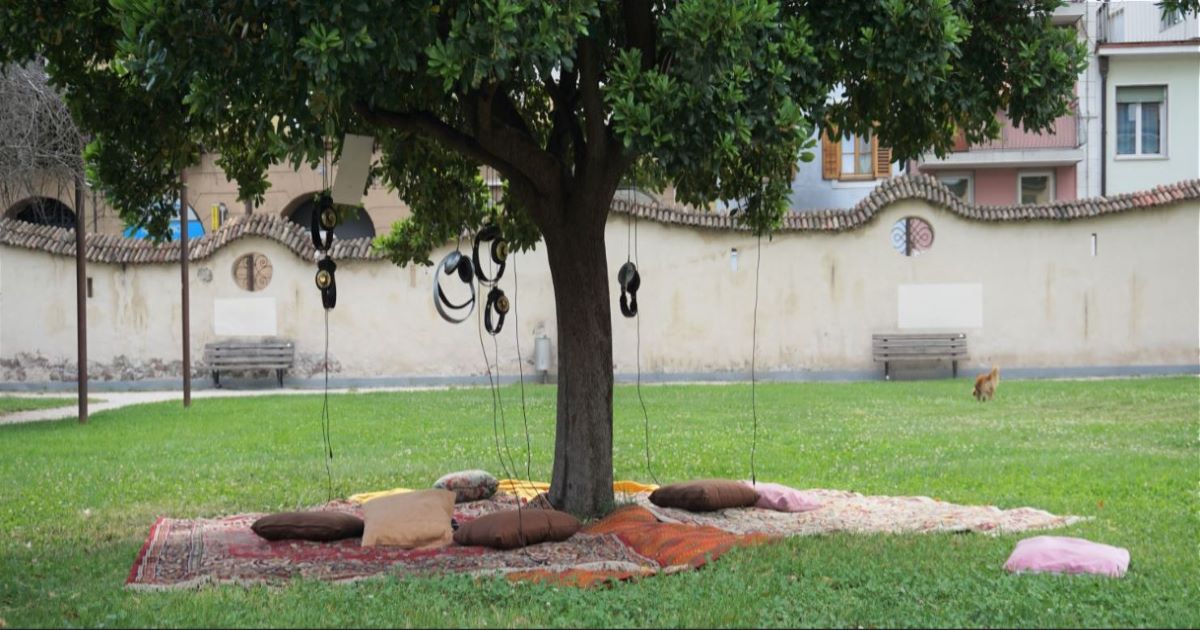 The current climate situation can be understood as merely a symptom of anthropocentric nature relations marked by capitalist extraction, (neo-)colonisation and domination (Chakrabarty 2020). Jain (2020) diagnoses a polarisation of the political landscape with either denial of the climate crisis or complete apocalypse state of standstill, hence a lack of agency regarding the climate crisis can be diagnosed.

Following the hypothesis that subjects are then able to develop agency when grieving the loss of biodiversity in presence and future, our project Future Talks – Voicing the Non-Human aimed on providing a different point of view to the debate, placing the non-humans at the center of the discussion. Stating that with the acknowledgement of our complex and dynamic entanglement with non-human beings (e.g. plants, animals, funghi and bacteria) less harm and more good is being done, or in other words: we start to care for life in all its forms, the aim of Future Talks was to open dialogues where humans and non-humans were being called to listen and care for each other. Therefore the project aimed at social and cultural change by seeking ways of thinking and feeling beyond the anthropocentric prospective. Linked to the theatre play Anthropos, Tyrann (Ödipus) produced by Vereinigte Bühnen Bozen (VBB) a public park in Bozen/Bolzano entered the stage to provide space for dialogues on the topic of anthropogenic climate change and our relations with the more than humans beings. The dialogues involved scientists, activists, artists and the citizens of Bozen/Bolzano inviting all of them to reflect jointly on the current climate crisis and pay more attention to the other living beings inhabiting this planet. Following a dialogue approach that put the nonverbal aspects of communication (e.g. hearing, touch, smell, taste) to the front, spaces for encounters between the participants and the non-human world were created.

“The politics of our future ends the exceptional position humans have given themselves as ethereal beings but brings him back to the soil of his origin. We are creatures out of mud, not from the sky.”

The event series was divided into three parts of an embodied cognitional process that aimed on contributing to subjects agency facing the challenges related to climate change: (1) awareness, (2) grief and (3) connection. The initial focus was to bring awareness on the more than humans as equivalent parts of the planet. Therefore bioacoustic signals from microorganisms in the soil, from plants and the inside of a tree were provided in attachment to a non-human being in the park (strawberry tree) to awaken peoples attention towards our environmental „surrounding“. Besides this intervention and verbal dialogues between visitors opened by selected quotes and citations, a manifesto reading on our entanglement with and existential dependence on earth worms was held by an artist. The second event focussed on grieving past, present and future losses resulting from the current ecological and climate situation on an individual and collective level to dissolve the taboo of talking about eco-emotions (Stanley, Hogg, Leviston & Walker 2021). For that, audios of burning trees, songs of extinct birds and mourning sounds of the sea were meant to shift peoples attention towards the suffering of the non-human world, evoking empathy and feelings of grief in the listener. Further, participants practiced to welcome negative eco-emotions, to stay and work with them in a non-judgemental way through a collective meditation. In the last event people were invited to (re)connect to the non-humans as well as to each other through a collective movement intervention (Biodanza). Thereby participants danced and sensed the earth with their feet, connecting to the terrestrial (Latour 2018) on a spiritual level. Besides that, a symphony made of sounds from nature was meant to align the listener’s embodied consciousness with nonhumans rhythms and paces. Lastly, a manifesto on water was supported by the somatic experience of frozen water melting in the hands of the audience.

The superior goal of the event series was to dissolve the dominant nature-culture dichotomy through open dialogues to deepen our understanding of being a part of nature – and further, of becoming terrestrial (Latour and Weibel 2020). Becoming terrestrial in the sense of landing on Earth by embracing our interwovenness with plants, animals, bacteria and mountains, etc. on different levels (spiritual, emotional, intellectual) to transform nature relations of destruction, extraction and exploitation into relations of mutual care‘‘-taking and respect across the species. The interaction with non-humans does thereby not imply that the experience of otherness is erased. On the contrary, Fuchs points out on the ground of Theory of Resonance (Rosa 2016) that „resonance is premised on the recognition of a fundamental difference between the self and the other: the resonant encounter with the other sets in train a dialogic process of adaptive transformation, that is partial absorption by or entry into the other’s sphere.“ (Fuchs 2020, p. 356).

For those encounters a certain amount of silence was premised or a capacity to perceive through all bodily senses, respectively. In western scholarships silence is merely understood as the binary opposite of speech whereby „speech enjoys primacy […] with silence negatively perceived as a lack“ (Acheson 2008, p. 536). Contrary to that, silence can be understood as an ideal for communicating the linguistically inexpressible: „When words are inadequate, when our language fails us, we perform silence as the more precise referential or expressive tool.“ (Acheson 2008, p. 539). Silent spaces affect bodies in different ways. They bring our own spatiality into our consciousness and stimulate our senses: „Silences call our attention to our own being-in-the world.“ (Acheson 2008, p. 545). The concept of Embodied Silence (Harvie 2021) highlights the importance of „staying with the moment of grief and examining the public role of lament as an embodied political act“ (Harvie 2021, p. 4). Using a collective meditation as a tool to work with (negative) eco-emotions, rooms for „embodied [and] joyful connections with the natural world in and against contexts of loss, suffering, and trauma“ (Eppert 2020) were opened. This (self-)educational praxis was meant to support participants in overcoming stages of melancholia, resignment and feelings of hopelessness (McIvor 2012) to develop capacities to act in meaningful ways. Meditation as a form of Embodied Silence (Harvie 2021) becomes a subversive act in a society in which the „climate crisis remain[s] silenced or ignored.“ (Harvie 2021, p. 5). Besides that meditation becomes an anti-heroically act because it does not enqueue into the „optimism of positive anthropocene narratives with their uncritical affirmation that human ingenuity […] will save the living world.“ (Harvie 2021, p. 8). To the contrary, in embodied silence the importance of developing the capacity of listening to the more-than-humans and learning from the movements of other species and the Earth is acknowledged. This capacity of listening requires an openness on the part of the listener implicating that „such a silence is not political passivity“ (Harvie 2021, p. 9) but a meaningful act, binding humans and non-humans in co-existence. Beyond that, it can be argued that listening is not narrowed to our sense of hearing. Human bodies and minds as holistic systems are able to develop empathy and establish relationships with other beings – human and nonhuman.

In general, reducing noise during the event by creating silent spaces for human-non-human encounters to let non-humans speak themselves through different mediums (e.g. poetry, sounds, music) seems to be a promising approach in shifting anthropocentric viewpoints towards more egalitarian and symbiotic relationalities. People enjoyed and „listening with open senses“ and the „peaceful“ atmosphere. As Georg Kaser, glaciologist and co-author of the 4th and 5th IPCC report stated in an interview (May, 2022): “I hope that climate itself, nature itself will waken us up before the tipping points are reached”. Instead of focusing on verbal political speech, feeling the liveliness and suffering of nonhumans in an embodied sense (Jain 2019) can lead to a deeper understanding of our entanglement with other species that enable our lives in the first place. An understanding whereby the subject transcends one’s immediate self-boundaries through integrating the self as part of the universe as a whole (Garcia-Romeu, 2010). Through that process resulting in a more holistic and broadened worldview meaningful actions towards others, other species and nature in general might follow. In that question, more empirical research is needed. It should be considered if our approach romanticizes and/or depolitizes human-nature relations but it can be argued against that (Harvie 2020). Concluding, Future Talks and comparable event formats hold the potential to become regular events whether being linked to a theatre production, a theme day (e.g Earth Day) or regional occasions. Bringing together different parts of society, transdisciplinarity creates different forms of knowledges regarding complex sustainability problems (Knapp et al. 2019). Those knowledge processes though, depend on the active engagement of all partners and participants – the will to face socio-ecological challenges.

Chakrabarty, D. (2020). The Human Sciences and Climate Change: A Crisis of Anthropocentrism. Science and Culture.

Eppert, C. (2020). Forest Walks and Literary Engagement in the Anthropocene: Meditations on Grief, Joy, and a Restorative Politics. In Phenomenologies of Grace (pp. 65-84). Palgrave Macmillan, Cham.

Fuchs, A. (2020). Resonance: a normative category or figure of uncertainty? On reading Hartmut Rosa with Thomas Mann’s The Magic Mountain. Journal of political power, 13(3), 353-365.

Garcia-Romeu, A. (2010). Self-transcendence as a measurable transpersonal construct. Journal of Transpersonal Psychology, 42(1), 26.